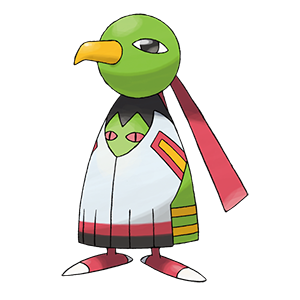 Magic Bounce is an integral inclusion when teambuilding in The Loser’s Game, and Xatu is the best representative of the ability thanks to its supportive options and Arena Trap immunity. Xatu checks Heal Pulse, Sticky Web, and Taunt users by reflecting these troublesome status moves back to the users, which makes it invaluable when supporting teammates weak to these tactics. Imprison allows it to setup on Pokemon like Mewtwo and Cottonee. Teleport and Baton Pass are both used for pivoting while retaining either Magic Bounce for the turn or effects like Perish Song. Tailwind is the most general support, and when used with Imprison and Teleport, Xatu may bring in Gothitelle to use the extra speed and slow pivoting for trapping more threats. Trick is worthwhile counterplay to opposing Trick users, as Xatu is reliant on its item for a self-KO. Lastly, Defog is an option if the team needs a check to Court Change. A Hasty nature maximizes the damage Xatu takes from Struggle, as it often reflects Taunt. Natu can be considered as it runs much of the same moves and is considerably more frail, but its lower Speed makes it worse against Absol, Stunky, and Xatu.